Written by David Stuerman on 05 September 2022. Posted in Guest Blog 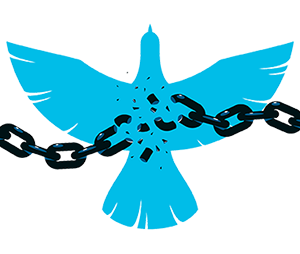 Shalom aleichem! I pray all is well, you are in high spirits, and that this letter is a blessing both to your soul and your life.

Have you ever noticed that a chain has links? The purpose of those links is to secure something and hold it in place. It takes several thick links to make it strong. I mean look at the size of the links that hold large ships to the shoreline or as anchors. Now imagine links that are ten times ten times that size. Those are the ones holding us down or shall I say holding us back.

In Genesis chapters 37-50, we find the story of Yoseph. As a child, he was loved and adored by his father. So, it would be fair to say he was spoiled. His brothers became envious. Especially, when you consider at 17 years of age, Yoseph would often work in the fields tending the flock with his brothers (Gen. 37:2). He would also snitch on them as a service to his father. Yoseph was already spoiled and now he's trying to create even more favor upon himself, by condemning them with his bad reports.

The saddest part of this is that he may not have even been aware of he was doing so. Sometimes we can be oblivious to our own actions. While others are all too keenly aware of our actions. that His brothers begin to hate Yoseph. They couldn’t even speak of him on good terms (Gen 37: 4). Yoseph was given dreams by God at a young age. So, in the typical Yoseph fashion, he ran his mouth to his brothers (who were already extremely jealous of him). He may have just wanted to share the dreams God had given him. But from his brother’s perspective, he was bragging again (Tit. 1: 15-16). Sometimes we can get it in our heads that it has to be only the way I see it…that makes it right.

But the truth is that things can be seen from many angles. We need to first check the motives of our hearts. Especially, before we make a reactive judgment, about another man's servant (Rom. 14: 4). Things aren't always as simple as they may seem. We should never judge things on a surface level. Only through prayer, the collection of facts, and in-depth thought can we even come close to judging righteously!

Finally, all judgments must be made and based on biblical principles. Yoseph had a very hard youth. He was hated by his brothers, tormented over time by his brothers, beaten I'm sure on several occasions, thrown into a pit while they contemplated his death, sold into slavery, accused of rape, thrown into prison without a fair trial, treated as less than human by most of his jailers, was taken advantage of by his fellow prisoners, and yet still served for The Glory of God with his dream interpretations. He was always willing to serve the needs of others, even when the other prisoner seem to forget what Yoseph did for him. But God was faithful and brought the prisoner's promise back into remembrance, which of course led Pharaoh to ask for him, which led to his liberation from prison and then to the right hand of Pharaoh.

Yacob had known from Yoseph's birth that his son would become great. However, anything worth having must come with a price. Yacob had known that…better than most. He, himself had wrestled with God and ended up with a broken hip before Yoseph had been born. True greatness always comes at a price. This is why the scriptures say, "for whom much is given, much is expected" (Luke 12:48). The greater the calling the greater the hardship, the greater the suffering, the greater the sacrifice. I think you get the point. How else can God mold us into something great without first removing, that which is not? A sculptor doesn't add clay to his sculpture, but instead removes that which is inessential, to get to the perfection…that already existed within. They call it pruning, and none of us like it.

Jumping to the key scripture (Gen. 50:20). Now Yoseph is approximately 56 years old and his brothers were before him, humbled by his position and scared for their lives. So much so that they even tried to lie to him about what his father had "allegedly said" before he died. Yoseph knew better. He had just spoken to his father before they showed up this time. They still hadn't changed, so the scriptures say that he wept. Sound familiar? It should because Yeshua did the same thing over unbelief (John 11:35).

Now Yoseph could have said finally I got you right where I want you. It's payback time! However, he did the exact opposite. He embraced them in hugs. (Wow! It sounds a lot like something Yeshua would do, doesn't it?) Instead of harboring all that pain, resentment, and anguish, Yoseph embraced his brothers. Forgiveness is truly divine. He decided to break every chain of all those past issues between him and his brothers. He refused to be bound by unforgiveness. Tethered to his past hardships. He decided to move forward in love.

Read Genesis 50:18-20. It says that they fell before him expecting the worst because of the things they did to Yoseph in his youth. They were even willing to be his servants. But look at what Yoseph said, "Am I in the place of God?" means that true forgiveness must come from God and God alone! Nevertheless, he could forgive them for the actions they inflicted upon him. Yoseph responded with, "As for you, as it is this day what you meant for evil against me…God meant it for good in order to bring about…as it is this day, to save many lives." We don't always know what God has planned for our lives, but we do know that…He has a plan (Jer. 29: 11-14). We just need to trust in Him and His plan.

We can help that plan come into perspective by submitting to His will for our lives and forgiving those who have wronged us. If we are willing to break every chain and release ourselves from the chains of unforgiveness, God will really begin to do a powerful work in our hearts. We'll be set free from the burdens of our past and maybe for the first time really be able to walk in victory.

Forgiveness isn't really for those who have harmed us. It is just about us. So that we can and will…no longer be held back with the chains of unforgiveness. Forgiveness removes those chains and the power it has to bind us with the tethers of our past. Of course, that is if we let them. We can choose to break every chain. The question is are we willing to?

Our God is so Loving and faithful to us that He'll never make us do anything. We must choose. That's the power of free will. However, remember he whom The Messiah sets free, is free indeed! If he was willing to forgive us all our transgressions…how much more should we forgive others their transgressions?

We must break every chain! But it all starts with you.

Your Brother in Yeshua in prison but set free in Christ,

David Stuerman is a prisoner at a correctional facility in Missouri, USA.