Every Hanukkiah is a Menorah, but not Every Menorah is a Hanukkiah 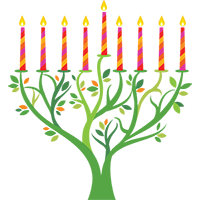 Confused? You’re not alone! Read on.

Every year Jews worldwide celebrate Hanukkah – the “Festival of Lights” or the “Feast of Dedication”. It starts on the 25th day of the Jewish month of Kislev. This year it begins early – on November 28th. (Coincidentally, in 2021, November 28th is also the first day of Advent!)

The basis for Hanukkah is a celebration of the rededication of the Second Temple in Jerusalem. In the 160s BC., the Holy Land was ruled by the Seleucids (Syrian Greeks). The ruler, Antiochus Epiphanes, persecuted Jews and outlawed Jewish rites and worship. He raided the temple in Jerusalem, stealing its treasures, sacrificing pigs on its altar, and making it into a house of worship to the Greek god Zeus. Eventually, a small band of Jews led by Judah Maccabee defeated Antiochus’ mighty army, driving the Greeks from the land. The Temple was recaptured, cleansed, and rededicated.

Jewish tradition teaches that for the rededication of the temple when it was time to light the wicks of the menorah, only one container of oil was found that had escaped contamination by the Greeks – enough for just one day. However, when they filled and lit the lamp, the oil miraculously lasted for eight full days (the amount of time it took for new oil to be prepared under conditions of ritual purity)!

The Hanukkah celebration involves meditations and prayers each evening around a special Hanukkah menorah called a hanukkiah. It is purposely designed to be different from the typical menorah. Whereas the normal menorah has seven lights, the hanukkiah has nine. Eight candles are in a line and the ninth candle is offset, either at a different height or in a different position on the hanukkiah. The one that is out of place is known as the “shamash” or “servant” candle. It is lit before the prayers are said and is used to light the other candles. Each night an additional candle is lit until all are shining in remembrance of the Jews in Maccabean times and the miracle of the oil.

John 10:22-23 indicates that Jesus honored this Jewish festival with His attendance. As Christ-followers, what are some aspects of Hannukah to which we can relate?

We are currently living in some difficult times. However, even in these times, God is asking each of us to shine the light of His hope to the hopeless of this world – Jews and Gentiles alike. Per C.S. Lewis, “Don’t shine so others can see you. Shine so that through you, others can see Him.” That is our task – to always strive to point people to Jesus, the Light of the world!