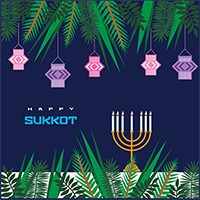 Sukkot: The word Sukkot is the plural form of “sukkah” which means dwelling, booth or tabernacle. During The Feast of Tabernacles, the Israelites build temporary booths or huts to dwell in, as a remembrance of God’s provision for them during their 40 years in the wilderness and our continued dependence upon Him through the ages. As stated in Leviticus, it is also intended as a reminiscence of the type of fragile dwellings in which the Israelites lived during their 40 years of travel in the desert after slavery in Egypt.

Sukkot has three different names it can be referred to: Sukkot, The Feast of Tabernacles, or the Feast of Booths. In these days of antisemitism, we need to be sensitive to our Jewish relatives, friends, and neighbors during a holy festival like Sukkot. My daughter was appalled when she heard a pastor refer to a sukkah as an outhouse! That not only offends, but it is blasphemous! It is ignorance to God’s Word to make such remarks. It will be addressed, but it will never be able to be repaired. One cannot retract words.

Now on the first day you shall take for yourselves the foliage of beautiful trees, palm branches and boughs of leafy trees and willows of the brook, and you shall rejoice before the Lord your God for seven days. (Num. 23:40)

Oh, my goodness! Sukkot is my all time - most favorite - happiest time of the year while living in Israel! The weather is cool, fall leaves are blowing all over the sidewalks of Jerusalem and the atmosphere is festive. On almost every other street there are stands of palm branches where boys, girls and their fathers are lined up to purchase some of the branches for the roofs of their “tabernacles” or sukkot.

The markets and grocery stores are full of people buying all types of food for the large dinners they will be hosting in their sukkot. There are plenty of desserts (rugelach - a Polish Jewish pastry like a cinnamon roll in the shape of a crescent roll, kugel - a baked Ashkenazi pudding or casserole made of noodles, as well as cakes and cookies), and wine and coffee and tea as well. Thinking about this makes me hungry, happy, and so very home sick for my beloved land!

During Sukkot, you rarely see a tent without at least 10-15 people gathered at meals. This is a time of celebration for families, friends, and acquaintances. It is a time of getting “caught-up” with old and new friends alike.

The entire assembly of those who had returned from the captivity made booths and lived in them. The sons of Israel had indeed not done so from the days of Joshua the son of Nun to that day. And there was great rejoicing. He read from the book of the law of God daily, from the first day to the last day. And they celebrated the feast seven days, and on the eighth day there was a solemn assembly according to the ordinance. (Neh. 8:17-18)

On almost every balcony you can see tents with palm branch roofs. Those who didn’t have a balcony set up their tents in a parking space, a vacant lot, or in their yard. The tents are not just for nightly feasts, but also for sleeping. Everyone spends the week of Sukkot living in their tent. Some sukkahs even have TVs and lighting.

Dinners began at sundown and there is talking, laughing and lots of singing. The songs are scripture, repeating God’s command to remember the time of wandering in the wilderness after escaping from slavery in Egypt. Nightly celebrations go on until late. Almost everyone is off from their job during this time.

Then on the fifteenth day of the seventh month you shall have a holy convocation; you shall do no laborious work, and you shall observe a feast to the Lord for seven days. (Num. 29:12)

This holiday or rather holy time is not a trite event. Everything the Jewish peoples partake in is based on God’s Word.

Now the feast of the Jews, the Feast of Booths, was near. Therefore, His brothers said to Him, “Leave here and go into Judea, so that Your disciples also may see Your works which You are doing.” (Jn. 7:2-3)

Throughout Sukkot, when reciting the grace after meals, the ya'aleh v'yavo passage is added in, as is an additional one-line prayer for festivals: "May the Merciful One let us inherit the day which is all good." There is also a special line unique to Sukkot: "May the Merciful One restore for us the fallen sukkah of David” (i.e., the Holy Temple ).

Some of our grandchildren build booths in their bedrooms while others build a booth on their balcony. In several Jewish neighborhoods, you might see booths up and down the streets. What a precious time to celebrate and recall all the Heavenly Father has done to save us from slavery and Egypt!

It really behooves us to remember our Egypt and how Yeshua saved us from our slavery and brought us to a new life. Wouldn’t it be wonderful to host a dinner for your friends and neighbors and share the truth of freedom with them?

It is our prayer that you are free from the bondage of sin and living in the new life God has for all who believe in and trust in Yeshua.

Love from my heart,

P.S. Do you have a prayer request? Please share it with me. I would love to hear from you.